It's been almost 3 months since I had my "Phase 2" so I thought I'd give an update. The surgery went well. I passed all the covid tests leading up to it. The surgery was scheduled later in the day that we initially expected, so we were able to drive to Madison without having to get up at 4am. Later in the day surgeries though are more nerve wracking because I have all of that time awake to think about it. Surgery was scheduled for 12:30. I was supposed to arrive at 10:30. We arrived at 9. I just couldn't sit around the house! The issue this caused though was that Mitch couldn't come into the hospital with me, he just dropped me off. He kept coming up with things that we could do instead of going to the hospital right away, but I had already had 1 covid test and did the hibicleanse shower and I really wasn't supposed to go walk around the mall or anything where I could be exposed to more...so I just showed up very early and read in the waiting room. Mitch went to the Mayfair mall and spent a lot of time wandering Target. 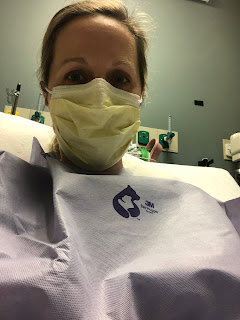 Surgery started a little bit later than expected. I'm not sure what the hold up was, I think I was told but I don't remember it. Everything was pretty standard in the surgery prep other than being by myself. My ovary removal went first. Dr. Barroilhet. She created an incision in my fake belly button and removed my ovaries robotically. They were sent to pathology and everything came back looking good. Dr. Affifi then started his work closing up the football shaped patches on my breast. There was more fat grafting done to add more shape and somehow lowered my abdominal scar. The ends of my hip to hip scar created what is referred to as a dog ear, so they were also fixed. It was supposed to be an outpatient procedure--a few hours in surgery, a few hours in recovery, and then back on our way home. However, I ended up having some issues in recovery. I woke up fine. I had to pass the oathstat test of being able to stand up and not have my blood pressure drop before they'd allow me to walk to the bathroom. I also had a Penrose drain in my back that would leak out a LOT of fluid as soon as I would sit up or try to stand up. It was about 7pm and I hadn't eaten since the night before. My blood pressure dropped every time I would try to stand. I was able to make it about 1 minute before feeling too dizzy. So I'd have to lie back down in bed. I kept thinking I'm just going to push through it for the next try but then there'd be a lot of beeping on the machine and they'd force me to sit down before I passed out. The went on every hour throughout the night. See the issue was that I had to pee really bad, like every hour. So every time I'd think ok, I'm going. to try this and every time my blood pressure would drop and every time after the five minutes of trying this I'd have to use a bedpan. Nurses are saints. I had to do this every hour throughout the night.  I bet someone was cursing the person who made the choice to pull my catheter before I woke up! 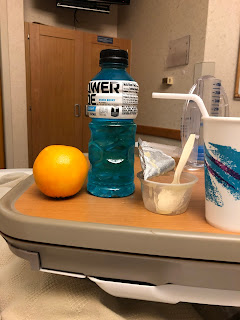 They thought that maybe I needed to eat something and my blood pressure wouldn't drop. But because of my food allergies and the time of night, all they could give me was this: an unpeeled orange, a blue Powerade, and jello. Now really, what is a patient with an iv in both hands supposed to do with an unpeeled orange? I ate the jello. I drank the disgusting blue Powerade--blue is the worst of all flavors. It didn't help. Finally, I was given more IV fluids and began feeling better around 6 am and passed the orthostat test after that. Then by 9am I was ready and waiting to go home. Mitch still wasn't allowed to come into the hospital, so he rolled up and met me at the front door and we drove home. That Penrose drain I mentioned earlier was the bane of my existence for a good week. I said earlier that the drain was in my back, but the most accurate way to describe it would actually be to say it was right above my butt. This little plastic tube sticking out right above my butt crack with fluid oozing out whenever I moved. I had to figure out how to catch this fluid because Penrose drains don't include anything to collect the fluid in. I developed a system of pads and post partum mesh underwear to make ,my own diaper like solution. I sat on beach towels at all time concerned that there would be a leak. Thank goodness, I was able to work from home that week! Finally after a week, I was able to remove the drain. Mitch snipped the stitch holding it in and yanked it out.
I had to wear compression for 2 months round the clock and now until 3 months I wear it during the day only. I took 4 weeks off from exercising, but am back up to the normal now.
I was very scared of the instant menopause that the removal of my ovaries would cause. I've had some issues with hot flashes and sleeplessness. But nothing uncontrollable. So far I'm doing just fine with it, it wasn't everything that I was so scared about.
Posted by Renee Jadin-Rice at 1:07 PM